Scarecrows and Swordsmen Make for an Exciting Weekend!

November 14, 2013
This weekend I had two consecutive day trips!

On Saturday, November 9th, I went to Aioi to watch a swordsmith make a katana and viewed the Scarecrow Festival; I also went on a bit of a hike, and visited an art museum! Aioi was about an hour away from Shirasagi by car. It was at a higher altitude, so it was a bit chilly in the morning. Once the sun came out, though, it got much more comfortable! The autumn leaves were absolutely stunning; there's nothing quite like seeing mountainsides dotted with colorful trees! 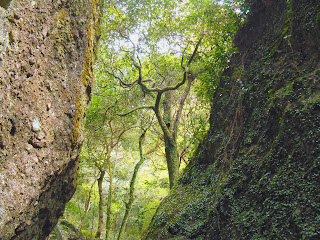 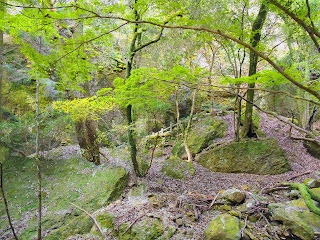 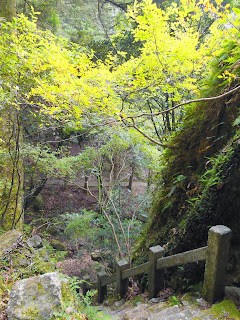 And the following photos below were some of my favorites of the scarecrows in the festival. I photographed them all; this is but a fraction of them! 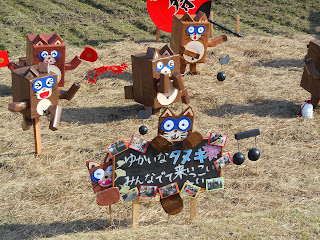 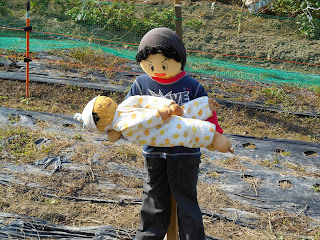 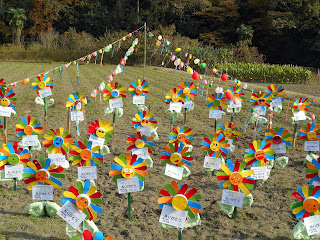 We then headed to an art museum in what was once a very rich farmer's home. Most of the artworks were ones that he compiled. I couldn't take photos inside, of course, but they were very beautiful! 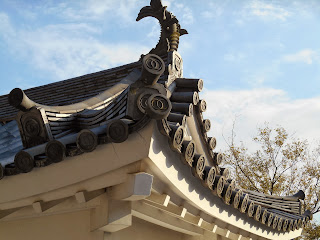 On Sunday we headed to the town of Ohara, which is about an hour and a half away from Shirasagi by car. It was a very misty and rainy day, as you can see from the photo below. We got rained on quite frequently! We visited this area because it was where Miyamoto Musashi, a legendary Japanese swordsman who lived about 400 years ago. He founded the two-sword style of fighting, and he was undefeated in over 60 recorded duels; he was also a writer, a painter, and a metalworker, to name a few of his skills. He was a renaissance man!

We met with a master of the Nitoryu (sp?) Style of fighting, which Miyamoto Musashi founded and received training in footwork and breathing in this very famous style! (Unfortunately the video I took of his demonstration seems to have gotten corrupted, and I have no idea if I'll be able to salvage it at this time; if I ever get it up and running, I will be sure to upload it!) 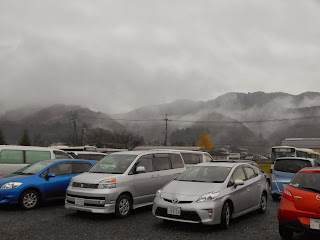 We stopped by an original highway during the Edo period. This road was the only way for the various daimyo (or feudal lords) to visit the Shogun in the capital. This means it was once very heavily trafficked and a hub or all sorts of trading activity. The lords were required to visit the Shogun in Edo every two years, and they had to spend quite a sum of money every day along the way for themselves and their retainers; and of course, the more retainers they had, the more important they were! Apparently the typical trip would run upwards of $200,000,000 in modern money. 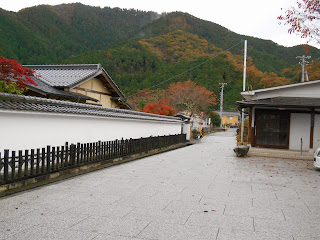 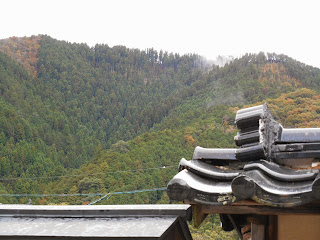 We stopped by Miyamoto's birthplace and grave on the final stretch of our journey on Sunday. Here's some (more) photos! 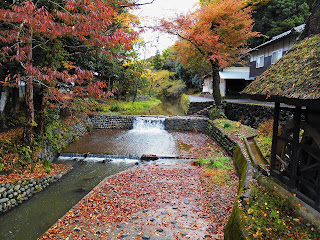 Enjoy the photos! I hope to spend more time writing about my experiences here in Japan soon in more blog posts, so stay tuned!

Popular posts from this blog

April 17, 2015
Yoshino Mountain is located in Nara Prefecture, and it is often considered one of the best places in Japan to see cherry blossoms. It takes about three hours and multiple train connections to get there from Himeji, which means that if you leave early enough, it's day-trip doable. I went there last weekend, on the 11th of April. The temperature was warm, but the weather alternated between foggy and cloudy. The trails were quite muddy due to the rainy days all of the week prior, but the views were still stunning! The trees were in various stages of losing their blossoms, so with each gust of wind petals were knocked off and blown about, creating a snowy impression. I wish I could have seen it on a sunny day, with the blossoms at their peak! I did my best to photograph the beautiful cherry-covered slopes during my hike, but the fog mutes the bright colors of the blossoms. New cherry leaves grow in with an orange-red color, which combined with the lingering pink and white blossoms c
Post a Comment
Read more

April 02, 2014
I don't think words can even begin to describe how incredible Spring has been so far in Japan! It is such a relief to actually be warm for once (which is now in the mid 60's for me). Everything you've ever heard about cherry blossom season in Japan is true: they are absolutely phenomenal! I've been doing a lot of travelling this week to experience the blossoms, and I have taken many photos! I'll sort them by locations, within different posts; all of these photos have been taken between March 29th and April 2nd. I still have some more trips planned for spring vacation, but I'm taking advantage of my first restful evening in the last week. The scaffolding is coming down fast at Himeji Castle! Sometimes you can see the castle peeking through the steel beams, and it still manages to look impressive despite the construction surrounding it. I've visited it twice so far this last week: on one day it was a bit rainy, and today it was just a bit cloudy instead.
Post a Comment
Read more

December 10, 2017
It was a cold, wet, rainy day, but that didn't stop everyone from coming out and enjoying the Nada Kenka Matsuri this year. I was only able to really enjoy the first day, but here's some neat photos from the event. I had a pretty good vantage point and was mostly sheltered from the rain, so I was able to relax and watch without getting trampled in the massive crowds.  Some mini shrines would precede the larger portable shrines ( yatai) , and they'd move very, very quickly.  It takes a lot of men to lift these shrines, particularly with four drummers sitting on the inside (and the drum itself weighs quite a bit!).  The yatai  were all too large to actually enter the gate into the main temple complex. So, ladders would be brought out and the top screwed off to safely drag the yatai  through the gate.  Seven different neighborhoods "compete" during the Fighting Festival, and each neighborhood is represented by a different color.  Younger boy
Post a Comment
Read more